I hope your 2020 is being fabulous so far! If not, I do have some book recommendations coming up in the rest of this week so stay tuned. 🙂 Today, I’d like to introduce another new release from one of my most favorite indie authors, whom I discovered last year, as well as offer you some sneak peeks/teasers/tour-wide giveaway as bonus content.

All right, before I start rambling, GLASS HALF FULL by Katia Rose is the one and only book love I’m gonna share with you. It’s not only the second installment in the Barflies series (which can be read as a standalone), but also the very first book I finished reading this year! Woohoo!! Hence, without further ado, let’s get started! ❤ 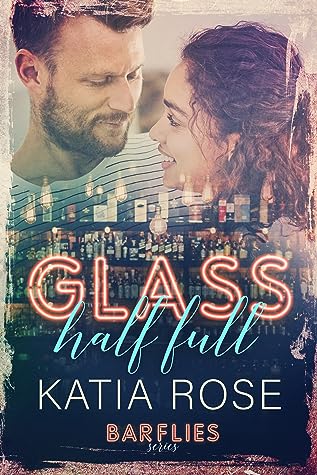 You win some, you lose some.

Back at home with half a college degree after the fiasco of the century sent her packing, it’s safe to say that Renee Nyobé is losing some. She’s a hot mess, and not the cute kind. No, if hot messes had categories, hers would be ‘littering the stairs of the metro station with your sweaty underwear because you were too busy rushing to the job interview you’re already late for to zip up your yoga bag.’

A job—any job—is just what she needs to get her life back on track, and it might as well be at Montreal’s most famous dive bar, Taverne Toulouse.

Dylan Trottard is winning some. As Taverne Toulouse’s new manager, he’s got one rule for himself: don’t screw up. Following that rule gets a lot harder when the woman he’s spent the past three years trying to forget starts working behind the bar.

Now they can’t keep their eyes off one another, and the stakes are even higher than before. There’s a lot to lose, but as the pull between them gets harder and harder to ignore, Renee and Dylan start asking how much winning is worth.

Glass Half Full is part of the Barflies series, a set of standalone romantic comedies that chronicle the lives and loves of the staff at a Montreal dive bar.

Add the book to your Goodreads TBR or purchase it on Amazon NOW!

Ah! What an entertaining read! Glass Half Full is the second installment in the Barflies series, which can be read as a standalone. I absolutely adored the first book, The Bar Next Door, and I’m so excited to say that this book doesn’t disappoint, either! Glass Half Full takes place in Taverne Toulouse, an exotic dive bar in Montreal (which is also a city I’ve wanted to visit in real life!), featuring Dylan and Renee, our main romantic ship characters, along with some beloved roles from The Bar Next Door such as Monroe, the bar owner.

What I love most about this story is the down-to-earth personality from Renee. She’s undoubtedly a badass, who’s strong enough to battle against anxiety. Besides, I’m completely taken aback by the raw emotions from Renee’s vivid description of panic attacks and nervous breakdowns because I can easily resonate with her during my lowest lows.

Thankfully, with the company of Dylan, Renee is able to pluck up her courage and find her inner strength. Also, Katia once again surprises me with all those glorious chapter titles and poetry slam ideas; they’re truly the icing on the cake!!

All in all, I HIGHLY RECOMMEND GLASS HALF FULL and please go check it out if you had spare time! I hope you’ll enjoy this book/series as much as I do.

***Thanks to the author for providing me with an e-ARC in exchange for an honest review.***

For a chance to win a $10 Amazon gift card, simply enter HERE!!

Last but not least, I hope you had a great time stopping by and learning more about this book as well as the amazing indie author. I really adored the writing style and those memorable characters so I hope you’ll get to meet them ASAP. Please don’t hesitate to let me know what you think about Taverne Toulouse, all the characters, or the plot in general whenever you’re finished!