It’s just the beginning of May and the month’s been promising already. Well…at least on my bookish notes. 😛

To begin with, bookish subscription boxes have been my ultimate kryptonite since I started trying out some of them and now I’m officially, uncontrollably, helplessly obsessed with them. As you can see, I’ve got a brand-new section on my blog dedicating to all the future bookish unboxing posts. THAT is the proof of my wholeheartedness. LOL

Therefore, please let me present you with my second and unfortunately, last box from Books that Matter, an U.K.-based bookish subscription box company. Don’t get me wrong; I’m still satisfied with everything in their boxes, but due to some personal reasons (I’ll elaborate later in the post), I won’t place any order from them. 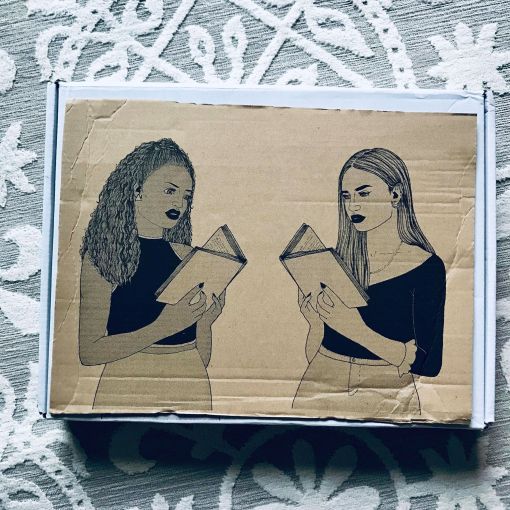 According to Books that Matter’s cue card, April is widely recognized as Black Women’s History Month. Thus, everything curated in the box is inspired by the book, which I’ll be showing by the end of the unboxing. Aside from that, the biggest difference is the cardboard of the box. Starting from April, Books that Matter will use the brown cardboard as shown in the picture above because it’s more eco-friendly and recyclable. I don’t know you, but I prefer the original white box (the bottom one) since it’s more beautiful visually. Although I’ve seen white boxes floating around in others’ May unboxings, I’m not sure if the team’s changed their mind. 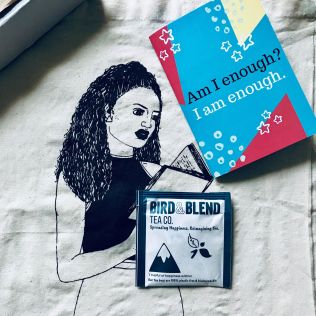 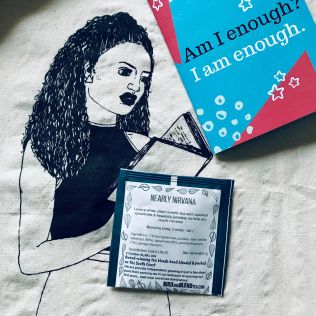 The first thing included in the box is a tea bag from an U.K. indie tea company called Bird & Blend, and the flavor I got is Nearly Nirvana (what a cool name!), a “luxury white silver needle tea with spiritual spearmint & heavenly jasmine, to help you reach nirvana.” Huh, sounds quite appealing to me! I haven’t tried the tea yet but I certainly will do. 🙂 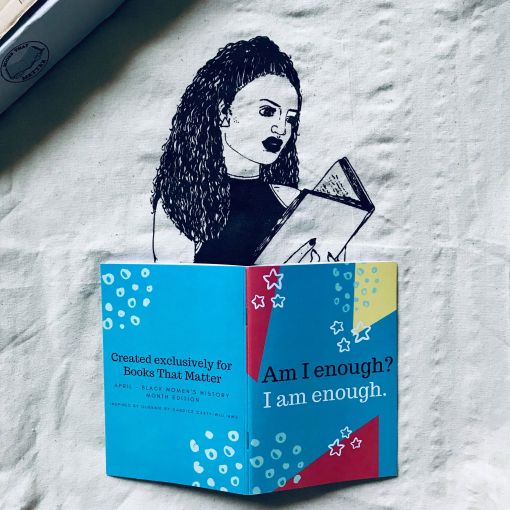 “Am I enough? I am enough.” Notebook

This notebook is created exclusively for this box and it’s inspired by the book of the month. Apparently, if you looked closer to the back of the notebook, you’d see the title of the book, which isn’t that mysterious anymore. :’D By the way, this is a small, blank pages notepad and I sure will use it someday. 🙂 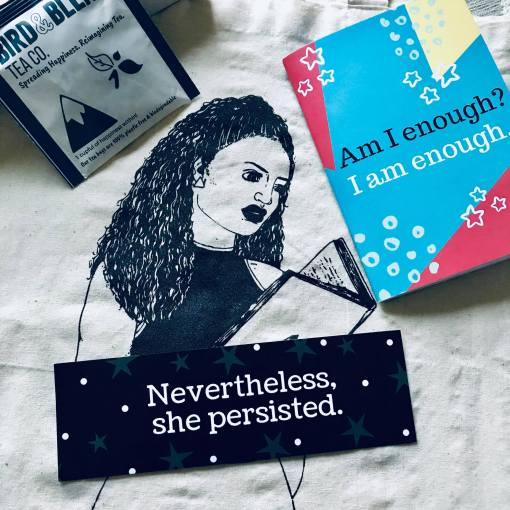 “Nevertheless, she persisted.” is a quote I’m absolutely fond of even though I have no idea who said that initially. The only thing I know about this expression is that it’s adopted by the feminist movement, especially in the United States. I’ve seen many t-shirts, tote bags, bookmarks, mugs, and other merchandises with this quote printed on them and somehow, these words empower me. Hence, I love this adorable bookmark with the powerful quote and cute polka dots decoration. ❤ 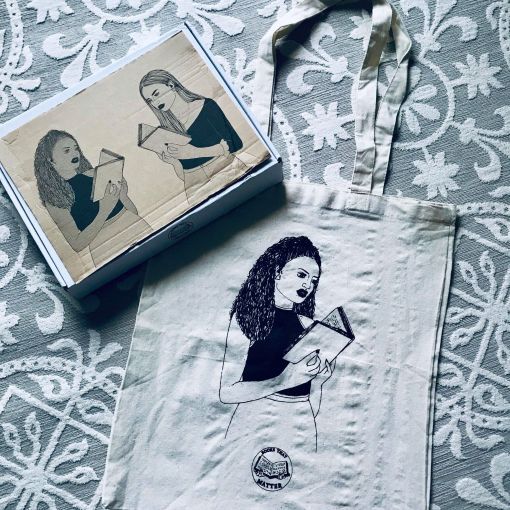 Aye, if you’ve read my March Books that Matter Unboxing, you’d know that I sort of was determined NOT to get this April box because I wanted to save money for another bookish box. The main reason I changed my mind is because of this tote bag right here. I am a huge lover of bookish totes, especially if there were bookish quotes or illustration on them. As a result, when I saw the sneak peek of April’s supplier on Books that Matter Instagram, I knew I had to get my hands on this box. *sigh, no self-control whatsoever* Gladly, this tote bag is bigger than I imagined and I LOVE the design, which is the same as their front cover of the box! 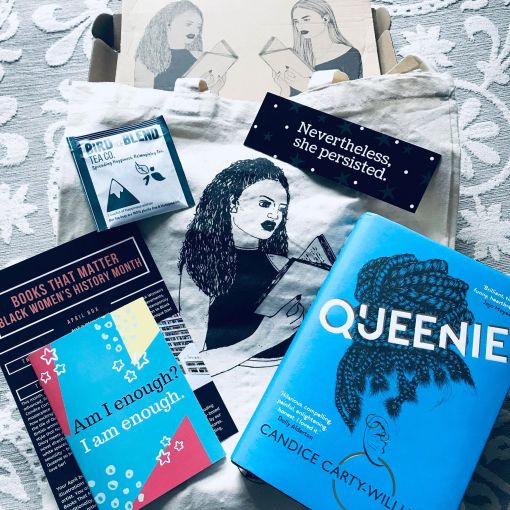 Book of the Month: QUEENIE by Candice Carty-Williams

Lookie, lookie, everyone! It’s finally the book of the month and much to my surprise, A LOT OF PEOPLE have this one on their most anticipated TBR in 2019! I honestly haven’t heard anything about this book, not even the book itself, until I got this in the box. What shocked me most is the fact that this box included the first edition HARDCOVER of the book! I’m positive by the time the subscribers got their books, it wasn’t officially released yet, which was a huge privilege to most of us. 😀 The books in April’s box came in three colors, bright pink, orange, and blue. I’m truly happy that I have the blue one because I think it’s the prettiest among all three of them. ❤

Anyways, I’m still in awe how amazing this April Books that Matter box is because a) I actually used a discount code and only paid £18.8 rather than the typical £20 for this box and b) this hardback copy of the book costs pretty much the same price as the entire box so I honestly don’t know how everything functions over there. :O Once again, I’m amazed by the incredible curation for this box and I really appreciate that there’s nothing useless in Books that Matter box.

Last Box from Books that Matter and this is why…

That being said, let’s talk about why I won’t get more boxes in the future. As you can see, I absolutely adore the items included in Books that Matter box and I’m devastated to make this decision. The biggest issue I have with this box (and their company) is their customer service. Their customer service representatives constantly show poor attitude when dealing with customers’ problems.

Earlier in April, I’ve tried contacted them via the email they provided on the website and received nothing. I then contacted them on Facebook (both the Facebook page AND their readers’ group) and still got no reply from anyone. I was asking for a tracking number since my box didn’t arrive at the usual delivery date and I wasn’t sure if my order was valid since I placed it quite late in March when they usually ship their boxes on the first day of the next month. And then I messaged them on Instagram, and FINALLY, the owner of the box replied to me…after a couple of days.

Untimely response aside, what I didn’t appreciate was the fact that she kept insisting on having sent an email regarding my problem days ago but I was 100% sure I didn’t receive it. She said “we definitely sent it” and somehow that sounded pretty defensive to me but whatever, I asked her to resend. I knew she read the message some time later that day, but I didn’t know if she actually did anything about it. Thankfully, I got my package before having to correspond with her again. *PHEW*

Interestingly, I was not the only one who’s disappointed by their customer service. I’ve seen other subscribers trying to reach out to them on social media platforms but to no avail. There were some complaints about their service on their Facebook page in that “Would you recommend this shop?” section (or is it called the “Reviews?”) and that part was taken down after the negative feedbacks were posted. *Dang it! I should’ve screenshotted it so I can better prove my point.*

I didn’t know why the company wouldn’t respect others’ opinions openly and instead, they chose to gaslight these people. *shrugs* Anyway, I personally value the customer service, the after-sales service much more than the products or creativity or popularity of the business. It makes no sense to me if everything is perfect in a book box when the team behind all the hard-work shows terrible attitude towards the customers with questions/unfavorable opinions. Therefore, this is why I won’t be getting any of Books that Matter’s future boxes, no matter how amazing they may seem. *Sealed the deal!*

All in all, if you’re still here, thank you very much for being so patient with all my ramblings! Please let me know what you think about this box, the bookish merch inside, or your thought about my decision for not buying anything from them. All comments are welcome! ❤

3 thoughts on “Bookish Unboxing | Books that Matter April: Black Women’s History Month (+why this is my last box from them)”