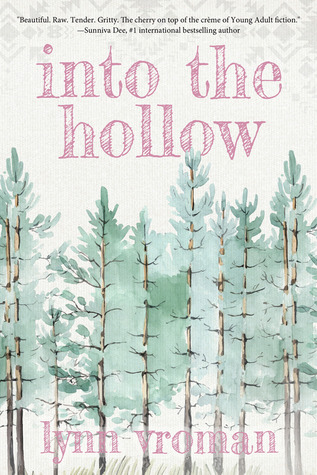 The hollow was the perfect place to hide.

Or so Free’s dad thought. His plan: flee California with Free’s five-year-old brother illegally in tow, hide out in the mountains of West Virginia, make fast cash during ginseng season, then escape to a nicer place where the law can’t find them. Free isn’t thrilled about living in a holler alongside drug dealers and thieves, but she’s willing to do whatever it takes to keep her family safe. Unfortunately, with their father disappearing into the woods with increasing frequency, Free and her brother exist largely alone. Until their neighbor Cole appears with lots of questions.

Cole’s spent his entire life in the holler—and his entire life working out a way to leave his druggie mother and incarcerated brother. As the editor of the school newspaper, he’s an expert at getting to the bottom of a story, and he’s determined to crack Free—who seems un-crack-able.

When the family she was desperate to protect is ripped apart, Free turns to Cole for help, the only person willing. But while her plan escalates, Free can’t deny the pull she feels toward the boy with too many questions—and who holds just as many secrets. As they become closer, she finds that Cole might need her help as much as she needs his.  (From: Goodreads)

Into the Hollow featured two teenagers, Free and Cole, living in the Appalachia Mountains Area, trying to figure out what was going on with their lives. When Free’s father went too far by dealing with the devil, her younger brother and her life was in serious jeopardy. They were hunted and threatened by the most notorious gangsters/drug dealers in the area so escaping their nightmare was hardly an option.

Mercifully, with the help of Cole, a cute neighbor who ended up going to the same school as Free, she regained her composure and found back the confidence and motivation she needed to keep moving forward. Little did Free know Cole may be fighting against his personal demons all this time he was doing his best giving her a hand.

For some reason, I felt closer to Free because of it (Amy brought in those clothes she’d promised, as Deacon had been doing for me in secret since the sixth grade), like she was made from the same fabric that constructed me. Except her fabric consisted of numbers where mine was sewn together with words.

As an aspiring journalist, Cole had a habit of putting down headlines in his notepad wherever he went. I loved his random thoughts and inner feelings for Free because he was such a sweet cinnamon roll with a kind heart and a soft spot for this math whizz girl (even though he doesn’t like math that much, ha!).

God, I wished I knew enough math to make her that happy all the time.

Despite the adversity both Free and Cole had to encounter, there was a pinch of humor in their daily banters that I absolutely adored. However awkward and inexperienced they were when it comes to love and life, they never backed away from stumbling through darkness just to find the silver lining.

I’d devoted the entire night to figuring out a way to find her. A waste of time. All I had to do was go into the cafeteria. Poof! There she stood, searching the room with a tray clutched in her hands, oblivious to the people staring at her—including me.

In the beginning of the story, I was totally obsessed with the background setting and character development. I highly appreciated how mature and thoughtful Free and Cole were because in my opinion, that was the highlight of this book. To my slight disappointment, I got lost somewhere in the middle of the story since Cole had way too many questions about Free that were left completely unanswered, untouched. I found myself searching for answers but to no avail.

Thankfully, the story picked up its pace as the ending approached. As relieved as I was to see Free and Cole figure a tiny part of their messed-up lives out, which resulted in them staying clear of the rabbit hole, I would definitely appreciate more if there could be more detailed disclosures on the whereabouts of those villains. I mean, I was pretty curious about what happened to them since they were sort of a crucial part of the story. Don’t get me wrong, the story itself was indeed an awesome-sauce with its well-developed characters and realistically heartfelt plot; it’s just that there were too many unsolved problems to thoroughly enjoy it.

All in all, Into the Hollow is a HIGHLY RECOMMENDED book from me because I think everyone should meet Free and Cole and take a closer look at how they sought the light through darkness, baby step by baby step. It’s an uplifting story since the characters were flawed, stuck with their messed-up families, but somehow fought their way back to normalcy successfully. My favorite feature of the story? It’s undoubtedly its bittersweet touch of reality and helplessness I believe some people in real life are still struggling with, whatever dark corners in the world they are in. Enough said, please go give this book a try and let me know what you think!