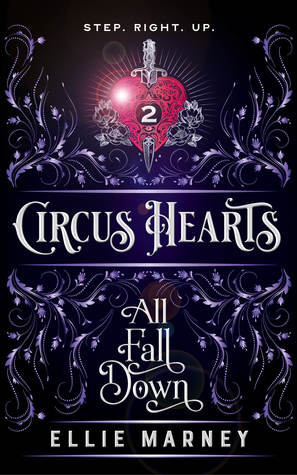 Nineteen-year-old Fleur Klatsch is loyal to her trapeze team and her ringmaster father, dedicated to the circus, and tough on everyone around her. After a series of accidents at Klatsch’s Karnival, Fleur is left holding the ball: she’s running the carnival, trying to stop a saboteur, and taking care of her dad. She doesn’t need anyone’s help, least of all Eugenia Deloren’s son, Marco, who’s been trying to break out of show life since the moment he was born into it.

All Marco needs to do is get Klatsch’s back on its feet so he can leave. But after one fateful kiss with Fleur, will he really want to? And will Fleur and Marco figure out who’s trying to kill the show before someone kills them…

Dark YA romance with a criminal twist – Circus Hearts: Step. Right. Up.

Did you ever realise that you were always the best part of my whole day, Fleur?” His words come out quietly.

All Fall Down picks up shortly after what’s left in the previous book, All the Little Bones, and the story goes on quite smoothly. Apparently, this book’s told from the ringmaster’s daughter, Fleur Klatsch, and how she deals with all the tragic events—happening one after another—in her precious circus. Long story short, there’s a saboteur trying to ruin her family business but the real question here is: WHO’s the saboteur? Is he/she someone on the lot or is that sneaky person a notorious enemy?

In order to probe deeper into every odd accident, Fleur finds herself a little overwhelmed by everything around her. Therefore, ENTER Marco Deloren, Fleur’s childhood best friend, who gives her a hand during the most frustrating part in her life, helps her clean up the mess, and rekindles their romantic friendship.

The carnival was only a pitstop for him. Something he agreed to do on his mother’s request, not something he’s committed to. His Duplo van, with nothing but the bare essentials, is only a rental, and so is he. Marco’s only on loan. He’s only temporary.
And I am the world’s biggest idiot.

To be honest, it’s hard not to compare this book to its first instalment, All the Little Bones, when the general story background is the same; thus, I’m both happy and sad to say that All Fall Down slightly disappoints me. For starters, if you’d read my review for All the Little Bones, you’d know that I HATE Fleur, who happens to be the main character in this book. She’s a overly spoilt daughter, an ungrateful brat, and also a shuiv@839#$%^ snitch. Granted, someone like Fleur serves the role of a villain perfectly, but I’m just not interested in her own story, a.k.a. this book.

Even though All Fall Down gives us other information about the series of tragedies in the circus, there are still too much portion of Fleur’s personal love life with Marco, her former best friend who left her abruptly when she needed him most, and her daddy’s accident. Call me heartless, but I really don’t feel bad for her at all. *shrugs*

What truly captivates me in this book is the entire process of searching for the circus saboteur. The thorough investigation, the shocking unveiling, and the creepy full disclosure are the most delicious elements that add spice to Fleur’s story. Despite the Fleur-drama in 60% of the book, the last part of the story seriously makes me reconsider giving this book a solid 4/5 stars. *heehee*

With everything being said, what are you waiting for? The next and final book in Circus Hearts trilogy will feature my second-favorite characters, Ren Putri the contortionist and Zep Deal the cardsharp, so I’m beyond thrilled to read it soon! Anyway, so far I HIGHLY recommend All the Little Bones and mildly recommend All Fall Down. Hopefully All Aces will pique my interest as much as the first book and I’ll probably end up loving the whole trilogy eventually. 😀

***Huge thanks to Ellie for sending me an e-copy in exchange for an honest review.***